We have a small update for you.
We finally found our new drummer William Izmalkov !
Meaning that we are finally in full formation.
Also, we signed with Redlion Music Agency, which means big things are gonna happen in the future!
Stay tuned!

Another important step for the band has been made by signing with REDLIONMUSIC Agency.
We are looking forward to our upcoming cooperation with Redlion and we do believe that we will raid Europe through and through.

Stay with us and keep your smile!“

For some time we were not able to play, nor sing and to top it all off our district of Cheb was closed down. Continuing the train of bad luck, our frontman La Resistans had problems with kidney stones, so he was not able to practise with us. Luckily, we are full of positive energy and everything turned out well and we are back on track.

Firstly, we have recorded two new music videos in our studio as part of the series "Live From The Basement". The first song that got released in this series of live performances was "BEAST" from our record "Diablerie" and few days ago we added the charming "HEX", which you can find in the "Video" section. We are going to keep working on this series and progressively release each track from the record.

Our brand new album is now in the finishing stage. We have recorded guitars, bass, samples and keys. Now it is time to record drums and vocals. However, the new record sounds great already!!! And by the way the name is "GARDEN".

We are also very thankfull that our German fans asked for us again, so we are happy to announce we will be returning to Rock club Nordbayern, Selb, to spread our music. Thank You!

And because we are working very hard and not slacking, prepare yourself for a huge flood of upcoming merch for our fans from all around the world. And trust me, there is a lot to look forward to.

Stay with us, keep tuned, with a smile on Your face and stay positive.

New year has come! Ereley wish You strong health and a positive mind in these struggling times. Be optimistic and wear a smile on Your face.

It is depressing to be without shows and gets more difficult to stay at home. We keep believing we shall meet soon, though!

We had to pause the work on our upcoming third record due to Lucas's health difficulties. He is suffering from having kidney stones. Hopefully, he will get better soon.

We are also planning to keep on work on the series "From the Basement" which we have already started with 'Beast' (video section).

After a bit longer period of time caused by the pandemic hysteria, we have some hot news from wild West.
It would be strange not being hot when it´s so hot outside that even birds jumps like arrows into the water, right?

Besides the fact we´re finishing preparations for next album (we miss the last song now), we had updated our logo and whole graphic design will be updated too quite soon according to the design of "Diablerie", where black and red leads (we´ve left our original colours for a while - black and green).

It has become quite normal for us that there has also been another changes in our line-up. After almost two years we´ve ended our cooperation with Martin (drums) and on the other hand we finally found a player for keyboards. His names is Matěj Brož and he´s the youngest guy from a band. Besides playing keyboards and dancing behind them, he also takes care about waste disposal in our rehersal room :-)
So far so good, he handles everything, so Matěj, welcome between the demons.

We still look for capable management, mainly aimed for abroad actions. Also, if there is any capable drummer between you guys, who can handle our, sometimes not realistic demands, we look forward for you to be the part of our demonic horde. Conditions for cooperation are clear: having a real good equipment (included in-ear), playing with click, taste and maximum deployment for a band.

1. The band is able to play any show even without drums, so if there is anyone willing to see us on your show, do not hesitate to contact us and we will come to you and release our "Diablerie" at you and your audience.

2. If you´re interested to buy our album "Diablerie", you can do this online, you can buy a physical copy on the internet, but you can also contact us, we have also some copies for sell.

Following the example of the friendly band Rádiomaják, we decided to have a series of videos from the rehearsal room, called "From the Basement", which is in charge of our frontman Lukáš (sound).

Enjoy the holidays and accept the drinking regime !!! For example Svijany or Litovel beer :-)

It’s Saturday, 22nd of February and we are headed into Germany on our first gig of that year.

The first shock came when we found out that our vehicle isn’t able to be used because of technical problems. Luckily, a friend of ours saved us and we are going in TOP condition car.

The moment we left Eger Stadt, a strong storm hits and we have to deal with the windy elements. We were close to Františkovy Lázně but far enough to dodge it’s traffic. We glimpsed around The Reservation of Aš (A home to the 8th wonder of the world, rare almost extinct endangered human beings) and swiftly moved onto German land. And we were shocked for the second time the day because we managed to get lost on the road despite we had GPS navigation on board. To Selb, we managed to get in time, but we had to go on an old rocky road where the only thing you’re able to encounter is an agricultural machine or a stoned cow eating hypno shrooms. :)

Nordbayern Music Club lies on the edge of Selb. The fact that it’s far enough from any civilization makes it a perfect place for loud music performances. At the moment we got out of car we met wonderful people, members of SpiteFuel and Dreams in Fragments. That’s when the third and one of the biggest shocks came, they helped us with all of our gear and helped us build it up on the stage.
Well, the whole fact is that we lent them drums and guitar cabs, which might appear shocking to homegrown musicians as well, right?

We were kindly welcomed by organizer family of Prechtl's. Everything goes well, everyone is in a good friendly mood - “kein stress, kein problem”.
The club itself is pretty small but stuffed with perfect gear including light park and fog machine.

The sound engineer Marco was perfectly prepared too, so within few minutes the Switzerland representatives - Dreams in Fragments - are ready with their sound. Next turn is ours. Marco was kindly surprised when he found out that we sent him all of our signals via our stage box so he didn’t have to plug anything else and we were ready within few minutes too. “Alles Richtig”. Last turn at Marco belonged to SpiteFuel. Again, no problems occurred and all the bands were ready to perform.

After a while when we all finished with the sound we headed to backstage to have a dinner, which might also be shocking for our homebrew friends.Everything goes as planned.

At exactly 7:30PM the door of the club opens and we are shocked again! First at the doors are our czech fans. Ladies and gentlemen who came to support us even when the entrance fee was 13€. Money that most of people wouldn’t pay in Czech, right?

Within 20 minutes the club was filled with people - SOLD OUT! If you see there a 15 year old lady, you’re not surprised. But when you see grandmothers and grandfathers, retired people, you don’t believe your eyes! Everyone is kind and friendly and looking forward enjoying a beautiful evening.

Swisses Dreams in Fragments started exactly at time and they were great! Especially the lady singer was in doing great! The band maybe lost a part of it’s sound because of the guitarist who was using Kemper Profiler and was plugged right into the P.A. system and this is really not a good idea in such a small club… The Kemper didn’t stand a chance in comparison with our ESH Amplification.

People were enjoying the show from the very beginning. It would be pointless to try to find someone who wasn't enjoying the atmosphere and not flowing on the same wave.

Then we moved on the stage and we also started right at time. We don’t want to boast but we did our 100% and the reply responded. This is the reason why you do it. For what you love it. It was a real Chupacábra. Adrenaline worked and made us feel like rolling in bulldozer. The only thing we didn’t understand is why is it possible to make something like this happen here but not 15 kilometers behind the borders…

SpiteFuel came on place as a last band. They play typical german heavy metal. Needlessly to say that they were perfectly organized and their performance was excellent! Really great musicians. The only problem was that the set was too long and the energy was slowly fading out.

However, that evening was incredibly fine. That is the moment you wish it never ended. You wish to play for people who smile back at you. For people who understand your music even if they don’t understand the lyrics.

I wish ERELEY only one: more of shows like this!!!

Alexander Prechtl at least half of year before the happening of this show shared our posts on Facebook and other social media, shared information about us and about members and did great job at the promotion. He is a real guy. Thank you very much!

That evening we sold more merchandise than in Czech republic the past year.

Yeah. And the gratification we got would be in czech probably just a ficiton.

Hi guys ... it's an interesting reading...
...you can find all reviews in the Media section

"Diablerie" is taken from ERELEY's album "Diablerie" - out on January 24, 2020 via Massacre Records - get it here » https://lnk.to/diablerie 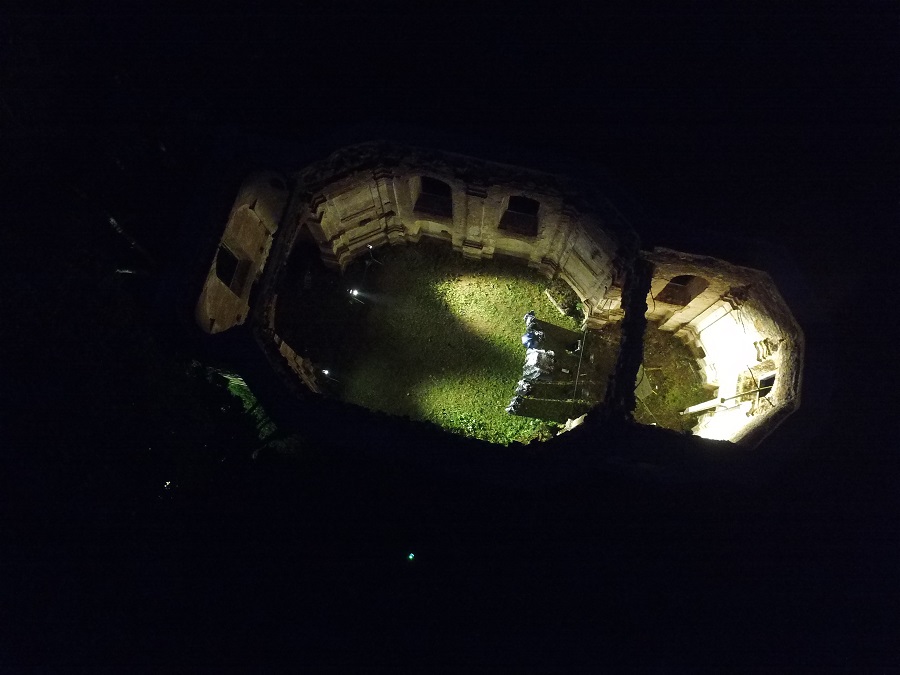 We had an awesome team of people in magical woods around St. Blazej church near by Touzim.
Also mr. Murphy and his laws touched us during shooting so there were crazy temperatures during the day and once night started came a load of rain.
You can check what was happening in a few photos we took.

Big up to everyone who was there with us.
Clear message from MASSACRE Records camp: release date for CD Diablerie - 23.8.2019
Before release itself we will unleash 2 videoclips.
Stay with us! Chuppacabra

So a surprise which we did promised has become true.
Today was released an official statement.
World known recording company Massacre Records (Germany) and Ereley has signed a contract.
This is how the dreams came true.
The truth also is that we did loose almost 3 years regarding personal changes. We´ve almost lost our breath but kept running.
Sometimes the way which leas to your dream is not quite pleasant. We hope that album will be released until summer.